Irish/Ireland coin old 1p penny pendant necklace. The size of the coin pendant is 3/4″ inch round.  Year 1964. It comes with an adjustable black cord from 17″ inch to 19″ inch.

Irish/Ireland coin old 1p penny pendant necklace. The size of the coin pendant is 3/4″ inch round.  Year 2000. It comes with an adjustable black cord from 17″ inch to 19″ inch.

The decimal one penny (1p) (Irish: pingin) coin was the second smallest denomination of the Irish pound. It was first issued when the Irish currency was decimalised on Decimal Day, 15 February 1971. It was the second of three new designs introduced all in bronze, the others being a half-penny and a two pence coin. All featured ornamental birds designed by Irish artist Gabriel Hayes on the reverse. The coin originally had a diameter of 2.032 centimetres and mass of 3.564 grams consisting of copper, tin and zinc. This was identical to the British decimal penny as the two countries’ pounds were pegged until 1979. The coin’s official designation was “new penny” and this was changed in 1985 to “penny”. In 1990 the decision was taken to produce the coin on a copper-plated steel base as the bronze had become too expensive. The steel base coins are magnetic. The coin was designed by the Irish artist Gabriel Hayes and the design is adapted from the Book of Kells held in Trinity College, Dublin. The coin was worth 1/100 of an Irish pound and was withdrawn with the arrival of the euro in Ireland (introduced in 1999 jointly, and from 2002 on its own).

There are no reviews yet. 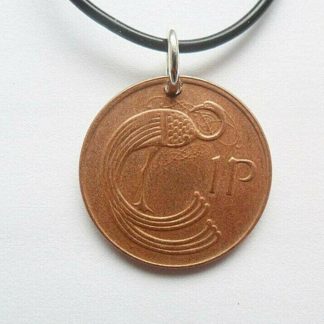